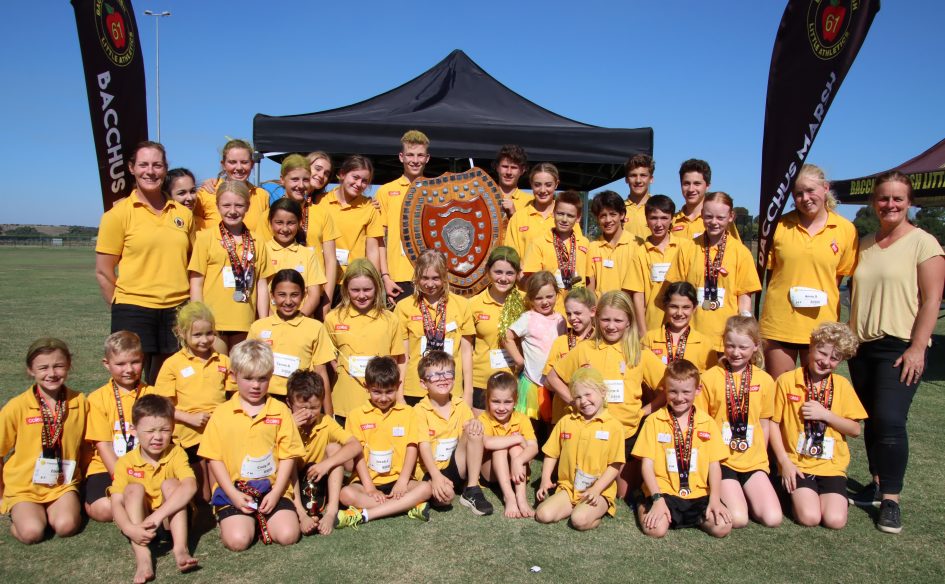 The 2021/22 BMLAC summer season came to a conclusion on Saturday with the Centre Championship Day held at Masons Lane Reserve.

Athletes competed in their 5 chosen events, with medals up for grabs for the top 3 placegetters.  The clinking of medals could be heard throughout the day as athlete’s outstanding results were rewarded.

The Championships were conducted in perfect conditions as temperatures reached the mid 20’s and not a breath of wind to hamper the athlete’s performances.

The excitement from athletes as they arrived early for check-in and to prepare for the penultimate day of the season was exhilarating .  An amazing 379 Personal Best performances were recorded for the day.  Bridie Shanahan set her 9th Centre record for the season, increasing her own Under 16 Triple Jump record with a final distance of 10.57 metres.

Once events had concluded, athletes and supporters came together for the 2021/22 Track and Field Season Centre presentations.  President, Maria Downes congratulated everyone on a fabulous season especially during the difficult and trying times of the COVID pandemic.  Maria thanked all local businesses who continue to support the Centre and applauded all athletes and families on another successful season.

The overall Centre Champions were awarded to Mia Dutt, Lucas Priestly (Juniors), Anni Clarke and Angus Norman (Intermediate) and Mackenzie Estlick and Samuel White (Seniors).  Encouragement awards were presented to Cindy Hawken, Alex Cauchi and Amelia Horne.  Special awards were presented to Nelson Banigo for the Jim Lilburne 100m Award, Emma Smith for the Wayne Arnold High Jump award, Angus Norman was awarded the Troy Lorensini Sportsmanship Award, Bridie Shanahan was presented with the Trevor Lyne Triple Jump trophy while Samuel White was the Most Improved athlete for the season.  The Egg Board Shield for the Champion Club was won by the Boomerangs.

The Centre will take a short break and will return for the Winter Cross Country season. The first competition will be held on Saturday 30th April at Masons Lane Reserve commencing at 10.30am.  Summer registered athlete fees include the Cross Country season, while new members are welcome to register for Cross Country for a small fee.

The Centre AGM will be held on Wednesday 4th May at 7.30pm at the clubrooms.