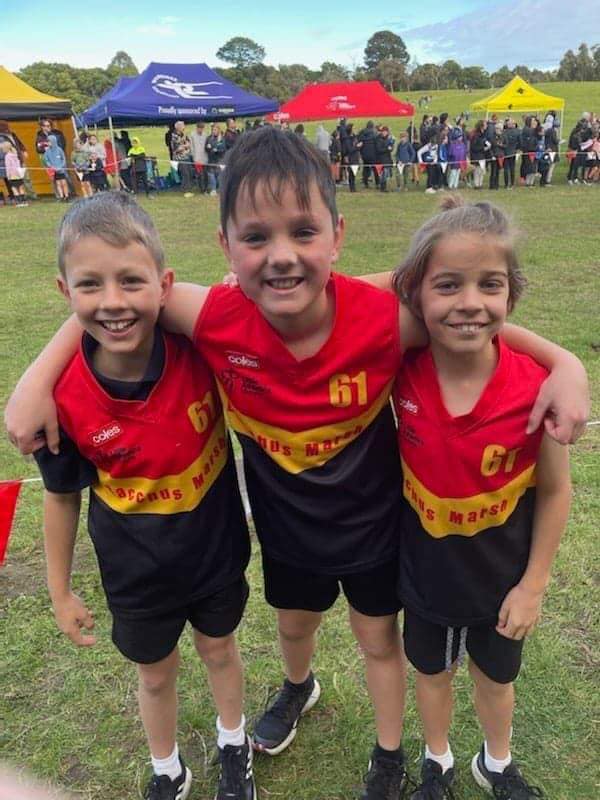 The Boys Under 10 team consisting of James White, Logan Simons and Zeke Horne were first to represent the Centre at the State Championships. All boys competed over 1km. James led the team out over the 1k course running a time of 5.00 mins before handing over to second runner Logan Simons. Logan ran a strong race to complete the course in 4.48 mins. Zeke Horne finished strongly running a time of 4.19 mins. The boys placed 28th overall, in a time of 14.07mins.

Next up for the morning was the Under 10 girls, also running 3 legs of a 1km course. Anni Clarke and Scarlett Wake were promoted up an age group, to fill a Western Metro Region representative team. All girls ran exceptional well. Anni led the team out as first runner, completing the course in 4.32 mins. Scarlett ran second for the team and produced a time of 5.12 mins while Melton’s Balreet Mann bought the team home in 4.18 mins, gaining several placings in the later stages of the race for the team to place 11th overall. Well done girls.

In the afternoon, the Boys Under 12 team comprising of Patrick Lovett, Lachlan Simons and Dushan Baniluk all completed a 1.5km leg of the relay. Patrick guided the Bacchus Marsh team out over the course running a time of 6.22 mins, and at the changeover saw the team placed mid field in the pack. Lachlan running the 2nd leg maintained the team’s placing, splitting the clock at 6.30 mins before handing over to Dushan to bring the team home in a time of 6.32 mins. Consistent running from all boys saw them finish 9th place in an overall time of 19.24 mins. Great effort boys.

Thank you to our Cross Country Co-ordinator, Brett Edwards who was Team Manager for the Championships.

Meanwhile, remaining athletes travelled out to Glenmore and were greeted with a lovely winter’s morning, as the sun shone over the camps grounds of Lady Northcote Camp.

First race for the morning was the Under 7 & 8 1km event. Melton’s Fletcher Reid crossed the finish line in 1st place followed by Emilia Ibrahim (BM) in a PB time of 4.33.22 mins, while Harry Johansen claimed 3rd place. Archie Clarke, Patrick Delaney, Ivy Wooding and Cindy Hawken all recorded PB times for the 1km.

Next up were the Under 6’s competing over 500 metres. This was an exciting race as Hendrix Wake and Bowie Clarke battled it out over the entire distance. Bowie produced his best performance thus far but was narrowly pipped on the line by Hendrix. Hayden Tung produced an outstanding run to place 3rd overall with a PB result. Victoria Hannan continues to improve and was the first girl home in a PB performance while Melton’s Tegh Mann also recorded a PB result.

The Under 9 and 10 athletes competed over 1.5kms. Bacchus Marsh’s Angus Norman ran a determined race and led the race from start to finish to claim his first win for the season in a PB time of 6:41.11 with Joshua Askew (BM) and Iyla Robinson (BM) claiming the minor placings. Bacchus Marsh athletes Mitchell Tung, Mackenzie Delaney and Ben Wooding all ran PB’s for the event.

With low attendance numbers in the Under 11-16 age groups due to State Relays and other sporting commitments it was decided to combine the age groups for the final event of the day. The Under 11 & 12’s ran their 2kms while the Open Age athletes completed an additional 1km loop for their 3km event.

Myah Estlick ran a very controlled race taking the win for the Under 11’s in a time of 9:43.40mins while Lily Norman was the overall Under 12 winner. Centre Captain Bradyn Rich completed his first Cross Country event for the season and claimed the win for the Open Age. Melton’s Allyson Currall ran a massive PB, slicing almost a minute off her previous time, to be the first Open Age girl home while the welcome return of Kira Watts saw her cross the line 3rd overall.

Next week’s meet will be held at Egan’s Reserve, Greendale at the later scheduled starting time of 11am. Due to the Queen’s Birthday Long Weekend, a different format will be conducted with unofficial Fun Runs being held. The Under 6’s will run over their usual distance of 500m while all other athletes will be racing together over a 1km course. At the completion of races families are welcome to gather at the local Greendale Pub for lunch or just a drink and chat.