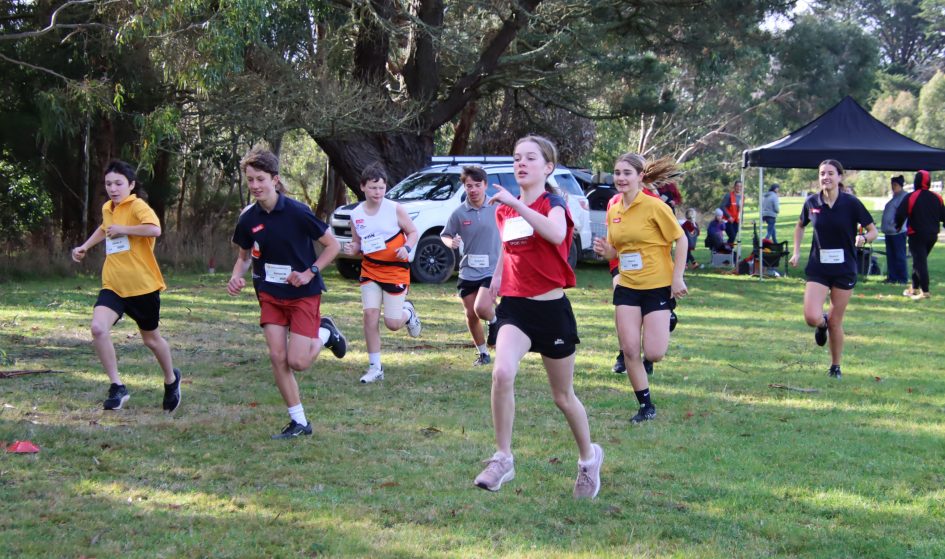 The course was a little wet underfoot, but this did not deter athletes from producing solid performances over their allocated distances.

The Under 6’s were first up, competing over a 500m course.  A much-improved Bowie Clarke (BM) notched up his first win for the season, crossing the finish line in a time of 2:36.10 mins ahead of Anabelle Menzies (BM) in 2nd place, running a PB of 2:41.03 mins with Hayden Tung (BM) running another consistent race, finishing in 3rd place. Victorian Hannam (BM) was 2nd placed Under 6 girl.

The combined Under 11/12 2km event was the next scheduled event. Once again Bacchus Marsh athletes, Dushan Baniluk, Patrick Lovett and Lachlan Simons were quick off the startline and set the early pace.  At the 1km turnaround, the boys held a substantial lead on the remaining field. Dushan stepped up the pace over the 2nd kilometre and opened up a narrow lead which he maintained to the finish and took the win in a time of 8:04.87 mins.  A sprint finish for the minor placings, saw Patrick take 2nd place with Lachlan in 3rd.  All 3 boys recorded big PB’s while the following athletes Guntaj Mangat (Melton), Lily Norman (BM), and Alexis Karmiste (Melton) also clocked up PB results.

The Open age athletes lined up next, to take on 3 laps of the 1km course.  Alexis Johnston (BM) in her first race for BMLAC, set an early fast pace, leading out over the first kilometre.  Sam White (BM) took the lead going into the 2nd lap and continued to increase this lead, claiming victory with a huge PB time of 12:19.08 mins. Alexis held on to 2nd place – 1st girl, while Oliver Carr (BM) was next across the finish line with a PB performance.  Braydn Rich (BM) and Allyson Currall (Melton) both also recorded PB’s.

The Under 7 and 8 athletes raced over one lap of a 1km course.  Under 7 athlete Fletcher Reid (Melton) returned to the winner’s list, running a PB of 4:14.27 mins while Tait Ash (BM), also Under 7, produced an exceptional run to finish 2nd with a 15 secs PB.  Emilia Ibrahim (BM) was the 1st Under 8 girl, while Rylee Robinson (BM) placed 1st for the Under 7 girls. Harry Johansen (BM), Patrick Delaney (BM), Sadie Lloyd (Ballarat), Emmy Foley (BM), Charlotte Delaney (BM), Gigi Baniluk (BM) all ran outstanding races, recording PB’s.

In the final event for the morning, Under 10 athlete Iyla Robinson (BM) continued her winning streak, claiming victory over the 1.5km event. Anni Clarke (BM) took victory for the Under 9’s and proves her hard work is paying off, recording another PB for the season.  Joshua Askew (BM) was 3rd across the line, 1st boy.

Next week’s Cross Country meet will be at Myrniong Reserve.

Region Cross Country entries close next Monday 4th July.  All Under 9-16 athletes are encouraged to enter and will have the opportunity to represent the Centre against other athletes from our Region. This event will be held at one of our home venues – Lake Dewar, Myrniong.