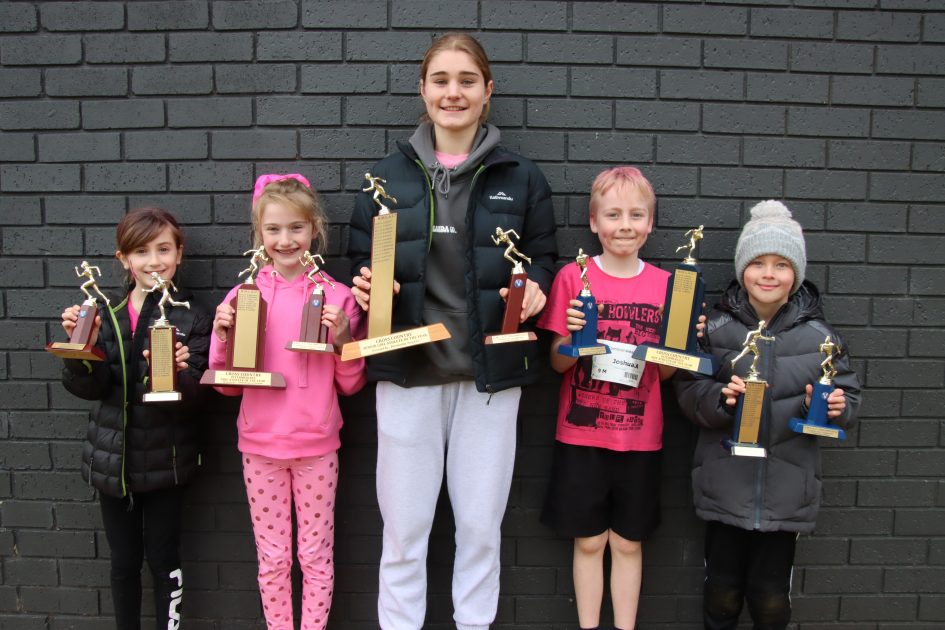 The final Cross Country meet for the season was held on Saturday morning at Masons Lane Reserve.  The theme was ‘Pink Day’ where everyone dressed up and donations were collected for the Breast Cancer Network Australia.  All races were conducted under a handicap format, calculated on each athlete’s average performance for the season.   A whopping 37 PB’s were recorded on the day!

The Open age athletes were first to compete, racing 3 laps of a 1km course.  Sam White was off scratch and endeavoured to run down the field of athletes.  Melton’s Allyson Currall led for the first 1km with Braydn Rich (BM) slowly closing in.  In the final kilometre, Sam White (BM) overtook the entire field, racing to another impressive PB performance, taking line honours in a time of 10.40.22 mins.  A fast-finishing Elise Cook (BM) crossed the line in 2nd place, while Braydn and Allyson fought it out for the minor placings with Braydn dipping at the line to claim 3rd place. All competitors recorded big PB’s.

The Under 6’s were next up for their 500m event. Front marker Victoria Hannam (BM) got off to her familiar quick start and held off a fast-finishing field of competitors to take line honours with a PB of 2:48.08 mins.  Hendrix Wake (BM) recorded the fastest time – 2:13.62 mins.

The Under 7 & 8 athletes competed over a 1km distance.  Gisborne’s Olivia Callister was the front marker and relished the opportunity to lead the event.  Olivia went on to take the win, claiming line honours and also a PB.  Bacchus Marsh’s Emilia Ibrahim recorded the fastest time with a PB of 4:03.59 mins.

In the Under 9/10 1.5km event, once again the front marker claimed line honours – Kiara Callister (Gisborne) making it a double for the family.  Zeke Horne (BM) recorded the fastest time – 5:29.35 mins.

At the conclusion of all races, athletes, friends and family came together for the end of season Cross Country presentations.

The Champion athletes were announced with Junior Champions being awarded to Fletcher Reid and Emilia Ibrahim.  The Intermediate Champions were presented to Joshua Askew and Anni Clarke and the Senior award winners were Tyler Vanotti and Elyse Cook.

Thank you to everyone who contributed to another successful season for our Centre. To the rabbits and hares who guided and ensured the safety of our athletes – thank you!  Special appreciation to Brenda and Brian who kept the troops fed throughout the season – those sausages and egg bacon rolls were a massive hit on a cool Saturday morning.  Thank you also to those who assisted at the finish line each week, whether it was recording, handing out placings, lining up our athletes or just ensuring the kids were well looked after; and to those who were course marshals – your help does not go unnoticed.  A big thank you to our Cross Country Co-ordinator Brett Edwards who not only set up our courses every week, but made sure athletes were prepared and ready for their races.  And of course, a huge thank you to the parents/guardians who transported their kids to events throughout the Shire and supported them every week.

While we all have a well-deserved break for a few weeks, it won’t be long until the new 2022/23 Track & Field season kicks off on Saturday 1st October.  Keep an eye on our Facebook page and emails for the opening of the LAVic registration portal.