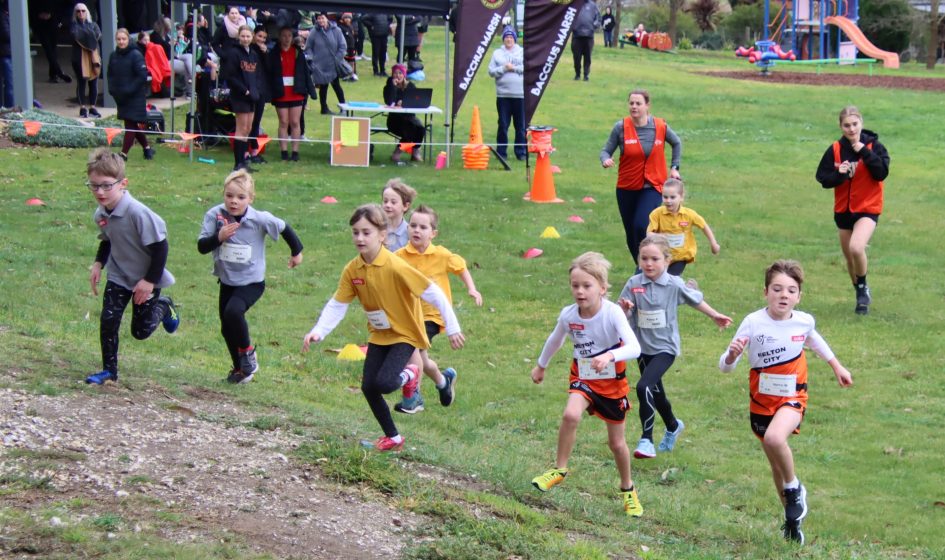 Week 10 of the Centre Cross Country season saw athletes return to Myrniong Reserve for this week’s competition.  Due to school holidays currently taking place, attendance numbers were slightly down.

The Under 7 and 8 athletes were the first race for the morning.  Melton team-mates Harry Wark and Fletcher Reid led the field out over the 1km course with Bacchus Marsh’s Emilia Ibrahim following closely.   Fletcher and Harry were neck and neck at the halfway mark but in the later stages of the race Fletcher had opened up a slight gap on the field with Emilia slipping into 2nd place.  Once again Fletcher finished strongly to take line honours, with Emilia holding onto 2nd (1st girl) and Harry claiming 3rd overall.  Athletes continue to improve as the season progresses and this race saw 90% of athletes record PB’s – Fletcher Reid (Melton), Emilia Ibrahim (BM), Harry Wark (Melton), Harry Johansen (BM), Patrick Delaney (BM), Archie Clarke (BM), Emmy Foley (BM) and Charlotte Delaney (BM).

The Open age athletes lined up on the start line next for their 3km event; 3 laps of the 1km course.  A slip on the start line did not deter Under 13 athlete, Alexis Johnston (BM) from stamping her authority on the rest of the field and setting the fast early pace.  Mackenzie Estlick (BM) battled hard throughout the race to remain in touch with the lead, but Alexis, in only her second race for the season, proved far too strong to claim victory in a time of 13:15.48 mins.  Both Alexis and Mackenzie recorded PB’s while Emma Stewart notched up a whopping 34 seconds PB.  Braydn Rich also recorded a big PB.

A small field of Under 11 & 12 girls contested the 2km event.  Melton’s Mataya Leetham was quick off the start line and was determined to claim her first overall win for the season.  Not only did she claim the victory, Mataya sliced over 25 seconds off her previous best time.  Myah Estlick (BM) was next home with Louisa Christians (Melton) running a sensational race to finish in 3rd place and record another PB.

The Under 9/10 athletes contested the 1500 metre race which consisted of a 500m loop followed by the 1km course.  Iyla Robinson (BM) continues to progress over the 1500m distance taking victory with a PB time of 6:10.10 mins.  Iyla will be one to watch in the upcoming Region Championships and will be vying for a top place at both the Little Aths and Schools State Championships next month.  Under 9 athlete Joshua Askew also ran a PB and was the first boy across the finish line.  Mitchell Tung (BM), who always gives 100% in his races, was rewarded with a PB result as was Mackenzie Delaney (BM).

Our enthusiastic Under 6’s were the final race of the meet.  The keen athletes took off quickly and were setting a fast pace, thanks to the early downhill, but it wasn’t long before the fast start took its toll on a few of the athletes.  Melton’s Mckinley Wilson showed her strength over the 500m course and recorded, yet another victory.  A fast-finishing Bowie Clarke ran out of distance but was closing quickly to finish in 2nd place while Hayden Tung, who like his older brother, leaves everything on the track and was rewarded with a top 3 finish.

Next week’s meet with be held at Lake Dewar.  This is the venue for the following week’s Region Cross Country Championships.  Bacchus Marsh will be represented by 16 athletes at Region, while at this stage Melton have 4 athletes registered to compete.  Final entries close Monday 4th July at 12 noon.