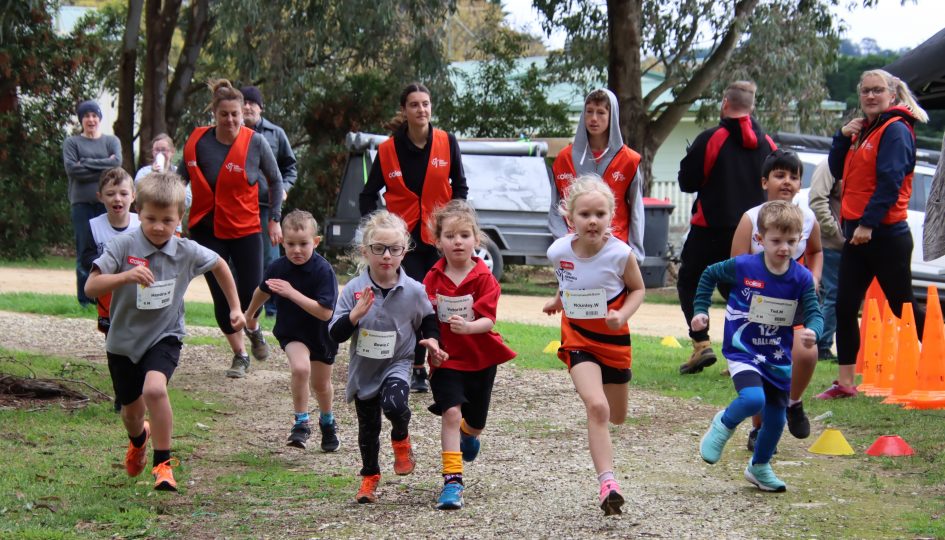 Myrniong Recreation Reserve was the venue for Week 3 of Cross Country competition.  A blustery, cool morning made it tough running. Athletes battled through the challenging conditions while some runners definitely took advantage of the tail winds to the finish line.

The Under 11 and 12 athletes were first up this week as they tackled 2 laps of a 1km course.  Lachlan Simons (Bacchus Marsh) established an early lead from the onset and didn’t look back, as he recorded a dominating performance, recording his first win for the season.  Austin Shea (BM) produced her best Cross Country run to date, showing much improvement, to cross the finish line 2nd overall, 1st girl.  Melton athletes Rajkamal singh Virk, Chord Wilson and Alexis Karmiste all recorded Personal Best results.

The Under 6 athletes were next to toe the line, taking on the 500m loop of the reserve.  Once again, Hendrix Wake (BM) took line honours while Melton’s McKinley Wilson closely followed in 2nd place with Hayden Tung (BM) just pipping Bowie Clarke (BM) on the line, to claim 3rd place.

The Under 9/10 athletes competed over 1.5kms.  Much improved athlete Joshua Askew produced his best performance, leading from start to finish, stopping the clock in a time of 6:30.95 mins.  While Melton’s Balreet Kaur Mann was a clear winner for the girls this week, running a PB of 6:38.69 mins.  James White (BM) and Mackenzie Delaney (BM) both recorded their best times for this season.

A small field of Open Age athletes competed over 3kms.  It was great to see Elise Cook back running injury free and producing an outstanding run, crossing the finish in 1st place.  Also, pleasing was to see the return of Emma Stewart to Cross Country in her first run for the season while Hashmeet Kaur (Melton) also competed in her first official run the season.  Well done girls.

In the final run for the morning, the Under 7 and 8 athletes lined up for their 1km event.  This group of keen and enthusiastic athletes were a little toey and after a second attempt, where off to a flying start.   Melton’s Fletcher Reid remains undefeated after recording another convincing win in a PB time of 4:28.86 mins.  Tait Ash (BM) was next home while Ballarat’s Archer Morris crossed the finish line in 3rd place.  Melton athletes Zorawar Singh, Seerat Aulakh, Divgeet Kaur Mann all recorded PB’s as did Bacchus Marsh athletes Cody Medcraft, Charlotte Delaney and Emma Foley.

Next week’s Cross Country meet will be held at Lake Dewar.  This is a great opportunity for our athletes to tackle the course which the Region and State events will be held at.  It is highly recommended all athletes arrive before 10.15am so they can walk the course and familiarise themselves with the terrain they will encounter on this varying course.